My first real experience of digital preservation was way back in 1999 when I worked on the Cedars Project. Created as part of the Electronic Libraries Programme (eLib), with funding from Jisc, Cedars was the first broad look at digital preservation issues in the UK. It set us on a course that began with the first tentative steps in preserving our cultural and scientific digital heritage and has taken us to an impressive position as a world leader in digital preservation capability. We even have the confidence to shout about our successes when there are suggestions from some quarters that we may be heading for a digital dark age.

Over the last 17 years I’ve participated in, and observed, a wealth of Jisc funded work that has acted as a critical enabler in making this progress. So I was a little apprehensive when the typically wide ranging Jisc funding calls, more often than not with a dedicated digital preservation stream, were replaced with something brand new and quite different. Would at least some of the focus on preservation survive in this new Jisc era?

Well as it turns out, I shouldn’t have worried! The Jisc Research Data Spring aimed to foster collaboration across the sector while driving forward innovation in the management and use of research data. I’ve been an observer of the evolving projects funded under the Data Spring and more recently have been involved more closely. It’s been exciting to see that the importance of preservation has not been lost on any of the participants. On the contrary, they have pitched, chosen and designed innovative work with digital preservation at the core. This is, I think, another indicator of the maturity of digital archiving in the UK.

The shape of the programme, with a ‘survival of the strongest’ approach has also been really successful. I only realised how successful when I was asked, last minute, to step in to a position on the judging panel for project pitches at the end of the second phase. I quickly discovered I’d foolishly volunteered for a near impossible task. How do you select which projects to fund when they are all at such a high standard? I have to admit I was a little sceptical of this highly competitive programme design when I first heard about it, but the results are impressive. Anecdotally, the project participants have also been praiseworthy of the approach. The short phases of intensive work do put the pressure on, but they seem to be a good fit for this kind research and development. They also seem to have engendered a stronger sense of cohesion within the programme. It’s been interesting to see the EU also have success with this kind of approach on the Preforma Project, albeit different in scale in several ways.

As a close partner of Jisc, with links via our members to much of the work funded under the Research Data Spring, the Digital Preservation Coalition was asked to have a look at the digital preservation aspects of the work. As the projects engage in the final phase of development, what opportunities exist to maximise the potential of the work, are there further options for collaboration beyond the project consortiums, and how can momentum be sustained beyond the project funding? We attempted to pull together and synthesize a variety of information on the projects, as well as answering those questions, and you can find the results here *.

Jen Mitcham, of the University of York and the Filling the Digital Preservation Gap project, blogged last year on the preservation aspects of all the phase 2 Research Data Spring projects. We’ve attempted to visualize this assessment, with results that I think reinforce the assertions I made above. If you start with a stripped down version of the functional model from our digital preservation bible, the OAIS… 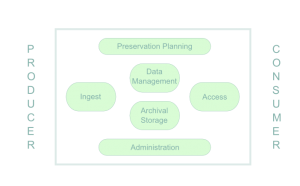 …and then overlay the Research Data Spring projects… 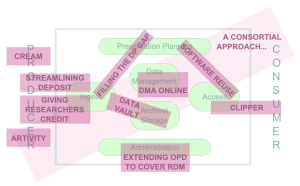 …the focus, coverage and to some extent, the natural cohesion of the variety of projects in the Research Data Spring becomes a little clearer.

I’m looking forward to the results of the final phase of the Research Data Spring, this autumn.

About the author: Paul Wheatley is Head of Research and Practice at the

*Please note that the synthesis work has been carried out in November 2015 – January 2016; many of the projects have made further progress and have more outputs to show for and you can find that on their blogs or websites.