Tamsin Burland, our research subject specialist reports on the CRIS2016 conference, where she delivered a session.

The ‘CRIS2016’ conference, organised by euroCRIS, was held 8th -10th June at the University of St Andrews in Scotland.  This is a biennial conference focussed on current trends in the use and development of Current Research Information Systems (CRIS).

A CRIS does exactly what the name suggests – it manages the research information of an organisation. For most systems, this includes information entities such as researcher details, their outputs, income and other information necessary for the management and reporting of research. A CRIS is at its most powerful when integrated with other systems within an organisation, such as HR, Finance, student systems and institutional repositories.  Ideally, it would also integrate with external systems such a bibliographic databases and/or funder and publisher systems.

I attended the conference to deliver a paper outlining how Jisc’s work supports reporting, communicating and measuring research in the UK research sector. A number of other presentations described other important areas of work to which Jisc has actively contributed, including: the CASRAI-UK Chapter (Valerie McCutcheon), Organisation Identifiers (Andrew MacEwan), Equipment.data (Adrian Cox) and development of a research data management administration tool, DMAOnline (Masud Khokhar). The latter, which won the award for the best paper, described work funded by Jisc’s Research Data Spring project.

My first interaction with a CRIS was in testing an in-house built version for a London University in 2006. What immediately struck me at CRIS2016 was the maturity this field has attained in those 10 years. CRISs are no longer an emerging resource within the research management sector and their need or worth is no longer questioned. In fact, their function is now an essential component to the open research infrastructure.

There were two interesting topics that I noted during the conference. First was the development and use of a ‘national’ CRIS in a number of European countries. The most highly developed system in this respect is the Norwegian national system, CRIStin. This system is used by all of Norway’s higher education institutions, research hospitals and independent research institutes as a tool for managing their research information internally and for reporting their research publications to government ministries. A paper given by Mona Hide Klausen described how new developments are now enabling CRIStin to become a national research information hub, with the ultimate aim of making research information systems fully interoperable, both nationally and, in the long term, internationally. 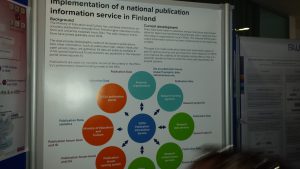 In addition, Susanna Mornati described how, over the course of one year, sixty-six Italian research institutions (mostly universities) have adopted IRIS, an open-source, interoperable CRIS platform and repository.  Similarly, Hanna-Mari Puuska from the CSC IT Center for Science presented a poster on the implementation of VIRTA, a national publication information service in Finland. In all three countries, the intention is that the uniformity of systems will facilitate interoperability, which will enable nationwide workflows and the automatic sharing and reporting of information. The repository functions associated with each of these systems aid compliance to EU OA requirements and enable the aggregation and showcasing of research outputs at the national level.

New Uses for a CRIS

The second topic of interest highlighted how the CRIS is now not only an administrative platform, but can be used to inform research assessment and facilitate research in its own right.  For example, Susanna Mornati presented work by her co-author Paola Galimberti who used output information from IRIS to investigate how research assessment exercises in Italy have influenced the publishing choices of Italian researchers. Other presentations in this theme included Peter L. van der Togt on the role of using a CRIS to influence researchers’ publishing behaviour, and the keynote talk by Gunnar Sivertsen on the use of a CRIS to develop research quality indicators that work more effectively than bibliometrics alone.

These presentations suggest that, as well as advances in the research management, reporting, measuring and communication, the continued evolution of the CRIS and its integration with other systems could significantly contribute to new avenues of research into research management and its effects on research behaviour.

Pre-conference proceedings for most papers are available here.  A selection of papers will also be published in a post-proceedings volume in the Procedia series. The next CRIS conference is in Sweden in 2018.

About the author: Tamsin Burland is a subject specialist focusing on research. Based in customer services, her role is to provide advice, guidance, training and consultancy in the area of academic research.

How Jisc supports reporting, communicating and measuring research in the UK

email
We use cookies on our website to give you the most relevant experience by remembering your preferences and repeat visits. By clicking “Accept”, you consent to the use of ALL the cookies.
Cookie settingsACCEPT
Manage consent

This website uses cookies to improve your experience while you navigate through the website. Out of these, the cookies that are categorized as necessary are stored on your browser as they are essential for the working of basic functionalities of the website. We also use third-party cookies that help us analyze and understand how you use this website. These cookies will be stored in your browser only with your consent. You also have the option to opt-out of these cookies. But opting out of some of these cookies may affect your browsing experience.
Necessary Always Enabled

Any cookies that may not be particularly necessary for the website to function and is used specifically to collect user personal data via analytics, ads, other embedded contents are termed as non-necessary cookies. It is mandatory to procure user consent prior to running these cookies on your website.