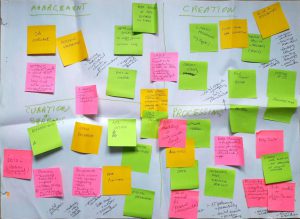 On Tuesday 25th April 2017 three facilitators and 21 experts met at the Centre for Life in Newcastle. Our aim was to discuss digital skills for research needs in the sector. In doing this we also wanted to help determine Jisc’s role in delivering skills training and support. There was a big spread of interested organisations at the event, including representatives from ARMA, Vitae, UCISA, and RLUK. The UKCoRR rep has since blogged about his experience at the event.

Do we need to define roles?

The day started with an exercise looking at the roles that are involved in the development of digital skills for research. The group agreed that staff roles were not the ideal way to understand the landscape. While of institutional significance, the process of conducting research is complex. In most cases, a project would require the involvement of many different professional research services in collaboration with researchers. A strand of RLUK’s strategy addresses this from the point of view of the library. The skills needed would vary from discipline to discipline, and even between projects. The expertise in any area could shift between groups depending on context.

However, there was considerable interest in the existing researcher profile attached to the Jisc Digital Capability framework. This came alongside strong support for the development of a profile for a research (support!*) professional. Exploration of this idea took two directions. First, an alternative suggested approach was to develop scenarios of common research activities that required different digital skills. These scenarios would complement the capability profiles. Second, the idea for the development of a curriculum for digital skills was mooted. Jisc could then consult discipline specific bodies to both adopt the generic curriculum and contextualise it for their subject area. The group also suggested further work to identify skills gaps in enabling research. This included exploring where and how data scientists contribute to the research lifecycle and other academic activities. One suggestion was for Jisc to coordinate a “pool” of data scientists for institutions to call upon.

Jisc is perceived to have a strong role and reputation in coordinating activity amongst other bodies and with the sector generally. We are already running a Research Data Network, with a series of successful events for the community of practice around research data management. There were a variety of suggestions on how this could be put into practice for digital skills, however, it was clear that no one thought Jisc was in direct competition with other organisations. Jisc’s role in highlighting and promoting good practice was also raised. This led to the recommendation to extend the scope of the Digital Capability Framework profiles to integrate links to existing good practice materials and research-focused scenarios. There was also support for an initiative to identify local good practice in developing skills and opportunities to scale that up nationally.

A collaborative event was suggested, focusing on research skills to bring together various skills development offers currently provided by other bodies or even individual institutions. There was considerable interest in the training model used in Software/Data/Library Carpentry, particularly the practical focus, volunteer network, cascade training, and open shared materials, and this could be included in such an event as a “showcase” of research skills development. The development of MOOC style courses for the sector was also raised.

The level of interest in digital skills for research from this knowledgeable and expert group demonstrates that there are opportunities for Jisc. Partnership and collaboration were seen as key in driving this area forward. Our current plan is to start to put the recommendations in place, in part by continuing to develop our relationships with other bodies, such as ARMA.

NB *important caveat on the use of the word “support” as this can be seen as diminishing the level of responsibility that a research professional can have in delivering a research project.